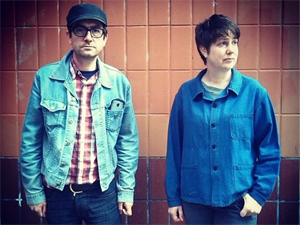 Formed in 2013, The Twelve Hour Foundation came together following requests for performances of Jez Butler’s album The Lighter Side of Concrete.

Although Polly had previously attributed it to a side-project, the name was adopted for the live line-up and is now permanent.

The majority of their tracks are built using a pair of 40-year-old synthesizers, mixed with treated field recordings and sounds created from samples of household objects: plastic tubing, bottles, corks, a wire draining rack, electrical appliances and the human body.

Their first album The Lighter Side of Concrete received great reviews and airplay by the likes of Stuart Maconie (The Freak Zone), Gareth Moses (More Than Human), Pete Wiggs (The Séance / Saint Etienne), Belbury Parish Magazine (Ghost Box Records) and the Project Moonbase podcast. It also featured as a Ghost Box ‘guest’ release.

The group’s first output for Castles in Space was released in May 2018.  Bunch of Fives – a limited edition lathe-cut single sold out within minutes.

The Twelve Hour Foundation evoke distant, half-remembered experiences and objects … the grouting between slabs of memory. Following live performances, audience members frequently approach the duo, saying they had been affected by the music, but couldn’t put their finger on why.

Polly has recorded with Jez in Death By Chocolate, contributing flute and vocals to the group’s most recent long-player Bric-a-Brac. She also features on the Hideki Kaji collaboration Hideki Spaghetti.

A feature film about the childhood band formed with her brothers in 1979 is currently in production.  Directed by Matt Hulse, The Hippies: Punk Rocked My Cradle looks back at their life in Cambridge.

Having experimented with electronic music in the early ‘80s, Jez moved to Bristol, where, following stints as a drummer in variety of bands, he began recording under the alias Vision On, a library music-inspired project, releasing one EP: Who’s Afraid of De Wolfe in 1995.

Support from Japanese recording artist Cornelius led to collaborative projects for Mike Alway’s if… and él  labels, working under a variety of guises with a core team and a range of vocalists including Hideki Kaji, Simon Fisher Turner, Louis Philippe, Ian Svenonius (David Candy) and Angela Tillett (Death By Chocolate).